This section houses my insane idea to write a story for every letter of the alphabet.  It started out being a project to just write ABC stories and stop there.  The response was so good, I was begged, cajoled, poked and prodded to continue.  So I began my journey to see just how many first time stories you can possibly write and still not repeat any plots!

About half way through, I was asking myself what the heck I'd gotten myself into!  But taking a few breaks to write other things helped and with the support and encouragement of the wonderful and loyal readers, I made it to the end of the alphabet and breathed a gigantic sigh of relief!

So here they are, all twenty-six first time stories.

Ironically, for how reluctantly I took on the project, they have become my "trademark".  Readers who haven't heard of anything else I've written, seem to know about the Alphabet Stories.  They are listed as the Alphabet Series on several other sites, however, I do not consider them a series, as they are not the continuation of one theme or story or plot.  All the stories here can be read as stand alones.

As time went on, some stories did become a part of other projects.  B and C became part of the Dark Sex Series, but can be read alone.  D story kicked off my Skinner/Clara series, which now contains five stories.  L story morphed into the Lullaby series that now contains four stories.*

I have written single sequels to several of the stories.  If you wish to see if a story has a sequel, you can visit the Alphabet Sequels section here: AlphaSequels*

If you wish to read the Dark Sex Series in its entirety, which begins with the story, "Happy Birthday, Love"; or the Lullaby Series, you can visit the SERIES section*.

If you wish to read the Skinner/Clara series, you can visit the Skinnerfic section*

Hope you enjoy the stories.  I would love to hear what you think.  Thanks for coming and thanks for reading! 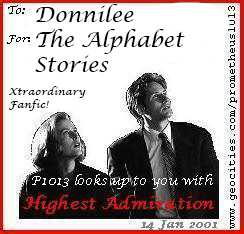